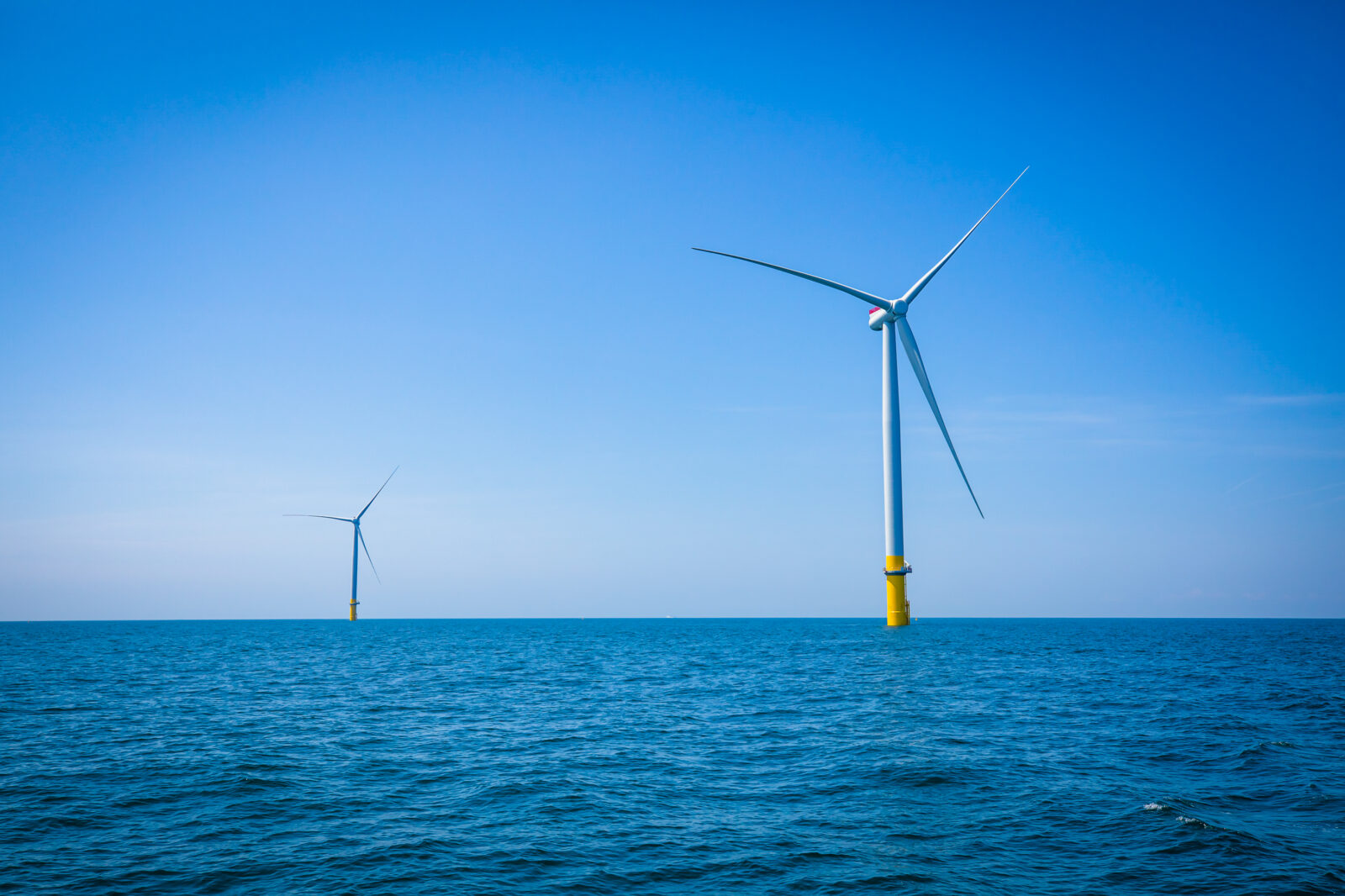 A little more than a year after The L.E. Myers Co. (L.E. Myers) crews completed work on the Coastal Virginia Offshore Wind (CVOW) project, the landmark pilot program is helping usher in a new era of energy development for our client, Dominion Energy, the Commonwealth of Virginia, and the U.S.

As the country’s second offshore wind project, and the first of its kind to be installed in federal waters, CVOW represents a significant step toward creating more sustainable energy for a greener future.

Sited 27 miles off the coast of Virginia, CVOW consists of two offshore wind turbines with an onshore electrical interconnect. Dominion Energy tasked L.E. Myers with completing the required onshore construction and installation for the electrical interconnection facilities, which connects the offshore turbines to an onshore substation that converts the power for use.

As the prime contractor, L.E. Myers oversaw the engineering, and procurement, and provided construction of the interconnection facility and other onshore components. From detailed design work, supply coordination, construction management, and post-installation commissioning, L.E. Myers completed the critical connection between the offshore and onshore electrical elements on time in June 2020.

After fusing 50-foot sections of high-density polyethylene (HDPE), a total of 3,300 linear feet of HDPE piping was installed underground through Horizontal Direction Drill methods to encase the export cable as it made its way from the ocean bed to its onshore landing.  This allowed the project to avoid impacting a beach, military station, and major roadways.

“When you witness it, it’s not that exciting since the work is underground, which also made it challenging to get photo documentation,” Project Manager, Jason Schacht recalls.

The excitement came when it was time to connect the two export cables. While Schacht and his team were installing the onshore pipe, a separate project was under way to install an undersea pipe and export cable into the seabed and up through the shore to the cable landing, the spot where the two pipes would meet.

“On the offshore side, we placed a casing into the ground – basically, a target for the drill – to guide the pipe in and out of the ocean floor,” Schacht says. “They drilled from a barge offshore, through the pipe, and out into the land.”

Of the seven drills conducted to connect the offshore cable with the onshore conduit, “they landed each one within 12 inches of the target,” he says.

Nerve-racking, right? “You just had to trust in the equipment and that you’re getting the data correct,” Schacht says.

As L.E. Myers’ first project related to offshore wind, CVOW tested the team in new ways and old, Schacht says. The biggest challenge was a familiar one: a delay in the project’s launch. Originally scheduled to finish their work by September, the start of bad weather season, crews couldn’t get started on the conduit installation until early 2020. The reason was a novel one for the team. They didn’t have the right barge.

“Our subcontractor procured a barge they felt was suitable but the project it was being used before ours didn’t complete on time, so the barge was held up,” Project Manager, Jason Schacht recalls. “Locating another one that could work safely that distance in the ocean was difficult.

“They’re typically used in offshore oil fields and they’re a highly limited resource. There are probably less than five available throughout the world, maybe three within the states.”

Schacht was impressed by CVOW’s scale.

“The level of detail … the offshore scope and the sheer mass, it was huge,” he says. “The global scale was enormous. The ships they used traveled from Europe and the offshore team was from all over the world – Canada, Italy, Spain, France, Denmark.”

The L.E. Myers team knew that effective, open lines of communication would be critical to the project’s success, especially since they were new to the world of offshore wind projects.

“We worked very closely on the front-end design with our engineering partner and the subcontractor team took the lead completing the HDD installation,” Schacht says. “We hired a third-party offshore specialist, too, to help ensure we were doing everything that needed to be done and to make sure the job was done safely and correctly.”

Now that the CVOW pilot project is underway – and, based on initial review, doing quite well – Dominion Energy has set its sights to full commercial project: CVOW-C, which calls for a 2.6-gigawatt offshore wind facility to be built adjacent the pilot project. When it is fully built out in 2026, CVOW-C will generate enough clean, sustainable energy to power up to 660,000 homes at peak and prevent the creation of as much as five million tons of carbon dioxide annually.

So far, CVOW-C appears to be on track. In July, the Bureau of Ocean Energy Management (BOEM) issued a Notice of Intent for the full commercial project, triggering a federal project review and preparation of an Environmental Impact Statement.

In August, Dominion Energy and the Port of Virginia entered a 10-year agreement for the company to lease 72 acres at the deep-water Portsmouth Marine Terminal as a staging and pre-assembly area for the additional foundations and turbines that will be installed next to the CVOW pilot project.

The move is another step toward positioning Virginia as “the national leader in offshore wind power” – significantly advancing the largest commercial clean energy offshore wind development in the U.S., Virginia Gov. Ralph Northam said in announcing the deal.

Offshore wind generation is a vital part of Dominion Energy’s comprehensive strategy to meet requirements in the Virginia Clean Economy Act by 2045 and to achieve its net zero carbon dioxide and methane emissions by 2050 across its 16-state footprint.

Thanks to the CVOW project team, L.E. Myers is well-positioned to support Dominion in its efforts to achieve a clean energy future. “Dominion is using this as their pilot project and they’re looking to expand,” Schacht says. “There’s more work ahead with them and more work in the northeast, too. This is a great starting point for us.”