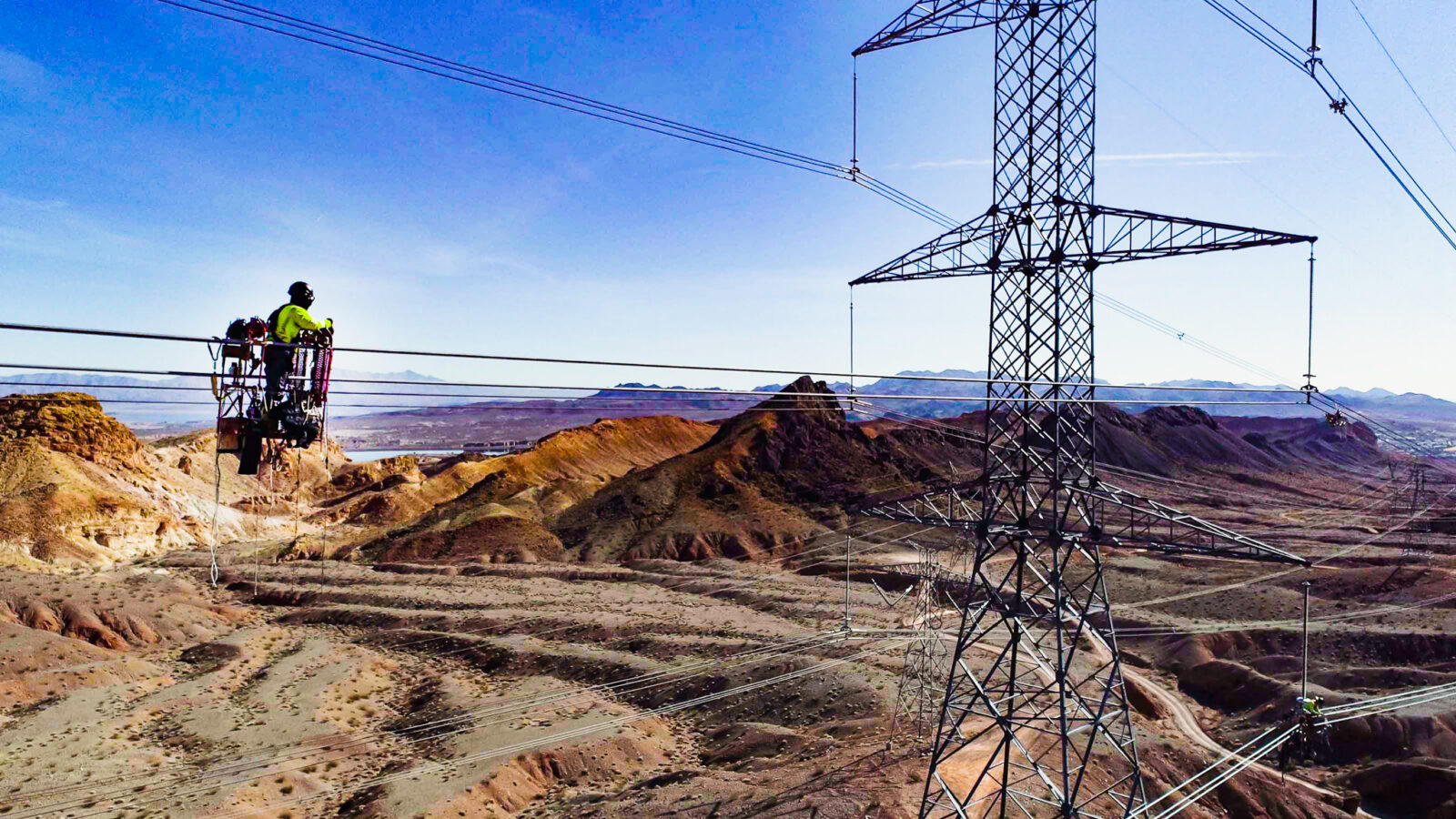 Traversing rugged desert terrain and running along the crowded corridor adjacent to Las Vegas, the Harry Allen to Eldorado line Sturgeon Electric with several challenges. In addition to assembling, erecting, and setting 39 self-supporting lattice towers, 19 self-supporting tubular structures, and 115 lattice guyed vee tangent structures, crews built all roadways, pads, and landings leading to the structures and worksites. Environmental concerns and regulation and a tight labor market added to the complexity.

“It’s everything from the 115-degree summer days, the dirt, the dust, the wind, our towers are big – they’re heavy,” Phillips said. “It’s one of the toughest jobs I’ve ever been a part of.”

A Mars-like landscape presented a major challenge to Sturgeon Electric crews. In areas of steep terrain, they used helicopters to hang travelers and install spacers and employed implosive splicing, a method of fusing longer sections of conductor together, to reduce the number of access points and heavy equipment needed.

Another top concern for crews: induction, an electric effect that can cause an otherwise de-energized conductor to build a dangerous charge because of its proximity to other live lines. Special precautions and procedures were included in the project’s site-specific safety and grounding plans to protect the team members and establish proper techniques while working in the somewhat unpredictable environment, Phillips said.

Most of the project alignment took place on public lands managed by the U.S. Department of the Interior’s Bureau of Land Management (BLM) Southern Nevada District Office, and the Bureau of Reclamation (Reclamation) Lower Colorado Region. Home to an array of desert flora and fauna such as desert tortoises, pygmy rabbits, and prickly pear cacti, the habitat required environmental protection to navigate.

One top priority was protecting tortoises, the state reptile. Sixty on site environmental monitors escorted crews and equipment on and off the right of way and conducted foot patrols around the construction zone. Sturgeon Electric also hired an environmental subcontractor and distributed rewards to any worker who spotted and reported these critters.

“It’s a great incentive program,” K2 Environmental Project Manager Jeff Montgomery said. “Sturgeon Electric has paid out over five thousand dollars on this program, so that means a lot of people are looking, and that was our goal at the start.”

These additional efforts led to 533 recorded observations and the relocation of 73 animals to safe areas.

Sturgeon Electric’s land stewardship also included protecting several plant species. Prickly pear cacti and other desert flora were relocated to nurseries for safekeeping until they were replanted during the project’s restoration phase.

Sturgeon Electric worked with the BLM, Bureau of Reclamation, and DesertLink to protect and restore the project area to its natural state. Open lines of communication played an important role throughout this project, Sturgeon Electric Regional Vice President Mindie McIff said.

“Because of our successful history and relationship with LS Power, we were able to use an open-book process to be very visible with our costs, expenses and man hours on the job,” McIff said.

In recent years, the push to upgrade California’s electrical infrastructure has reduced the pool of experienced line workers available for work in other states. As a result, Sturgeon Electric employed a higher number of apprentices on the project and worked diligently to train and bring them up to speed on all tasks and considerations.

“It’s a difficult, complex project, and I’m really impressed with how our supervision and management were able to bring these new people together and get this project done successfully with limited safety issues,” McIff said. The Harry Allen-Eldorado project finished in March 2020 and is an excellent example of Sturgeon Electric’s capabilities.